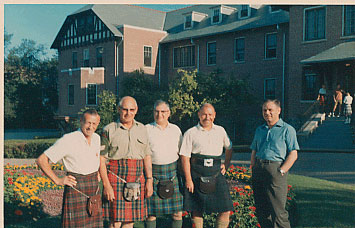 Although not a musician, Hugh was an organizer par excellence. He was the main organizer and founder of Moose Jaw's Sprigs o' Heather. In the mid 1960s I became obsessed with establishing a piping and drumming school for kids on the prairies after attending the Invermark piping school in New York State and serving as C.O. and chief instructor at the Canadian Army school at Currie Barracks in Calgary. Although I lived in Calgary at that time, Hugh was the first person I discussed this with, and he set to work organizing the first Piping and Drumming School ever held on the prairies, in Moose Jaw at Riverview Collegiate (in 1964? or 65?). Hugh also arranged a meeting with Premier Thatcher where we and Frank Connell of the Moose Jaw Lion's Junior Band convinced him to allow us to establish a Summer School For The Arts at Fort San. Primarily due to the work of Frank and Hugh, next year the summer school was set up to provide instruction in a wide variety of arts—including piping and drumming. Hugh served as the Administrator of Piping and Drumming for the first few years.