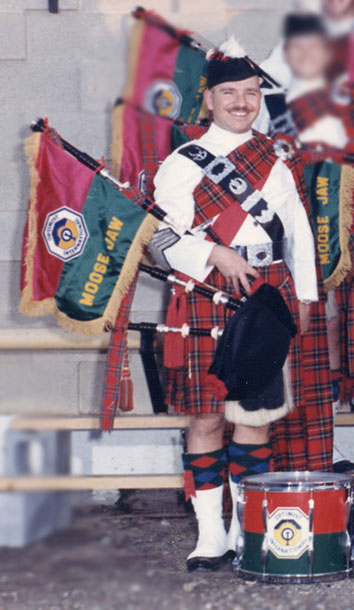 At the age of eleven I joined the St. Andrew's Society Boy's Pipe Band in Moose Jaw. Six months later I made my first public appearance -- before Princess Elizabeth. Enthusiasm and the fine instruction of Pipe Major Bob Shepherd and Jim Carnegie of Belbeck, formerly of the Edinburgh City Police, brought me three Saskatchewan Junior Piping Championships.

After High School I joined the Canadian Army as a piper destined for the Black Watch of Canada, but ended up an officer in the Royal Canadian Armoured Corps. I eventually settled on a teaching career in Calgary. There I served as Band Officer of the 19th Medium Regiment which eventually became the Clan MacBain Pipe Band with which I played several years. I spent part of a summer at the Invermark School of Piping in New York State learning the basics of piobaireachd and earning their highest certificate. In 1962 I was honoured to be chosen as Chief Instructor of the Prairie Command School of Piping and Drumming at Currie Barracks. In later years I conducted workshops and schools in British Columbia, Alberta, Saskatchewan, Manitoba, Ontario, and Montana.

In 1967 I returned to my hometown of Moose Jaw where I remained for the next quarter century as a high school teacher. There I served as Band Director/Pipe Major of the White Hackle. During that time the band won the Provincial Championship over a dozen times, were International Champions, runner-up for the Eastern Canadian Championship, Third in the North American Championships (all in our only visit to Ontario), won the 1986 Expo Championship in Vancouver, and took Sixth in the European Championships. These events were in Third and Fourth Grades.

The White Hackle was well received in the U.S.A., England, Scotland, Australia, New Zealand, and Canada, including invitational performances at two World's Fairs, Disney World, and a Command Performance for the Governor General of Canada. At the same time the band was earning an international reputation for showmanship and Fancy Drill, having won numerous competitions against pipe bands and huge marching bands.

I was co-founder of the Saskatchewan Summer School of the Arts and The Prairie Pipe Band Association and served in a variety of roles and executive positions from the 1960‘s to the 1990‘s. I wrote several pamphlets and articles on piping as well as being Editor of "The Bandsman", the newsletter of the Prairie Pipe Band Association. However, I am most proud of having taught piping and even bass and tenor-drumming to hundreds of youths, many of whom have gone on to do the same for the succeeding generations.

Like many pipers, I am addicted to composing, having churned out countless tunes to amuse myself. The last time I spoke with the late Donald MacLeod MBE he told me he intended to bring out a seventh book of pipe music and wanted permission to include six of my compositions. Of course, I was delighted and agreed. Unfortunately, Donald passed away months later, and his seventh book was never published. I never thought to ask him which tunes he wanted to use. Nevertheless, he did include two of my efforts in previous publications, as well as a fine 2/4 march he composed for me and a lovely slow air for my eldest son, Lachlan.

For many years I have been an adjudicator of Piping and Ensemble and even Bass-Tenor competitions in Nova Scotia, Ontario, Manitoba, Saskatchewan, Alberta, British Columbia, Montana, and Washington State.

In 1993 I left Moose Jaw to begin a new career as a retiree in Cloverdale, B.C., where I continued piping with The Delta Police Pipe Band, The White Spot Pipe Band, the Langley Legion Pipe Band, and the Vancouver Police Pipe Band. In associated music fields I am the piper for Tartan Pride Highland Dance Team, and enjoy playing a few tunes with the popular Celtic band, Blackthorn.  I served on the executive of the B.C. Pipers Association for a number of years..