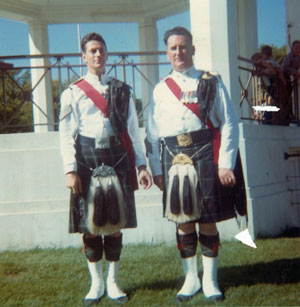 In 1938, at age 16, Hugh joined the Saskatoon Light Infantry and during his training in Vernon, B.C. he met another champion piper, William Barrie who gave Hugh a set of pipes and continued with his lessons. Hugh went overseas in 1943 and transferred to the Queen's Own Cameron Highlanders of Winnipeg. Upon his arrival home, Hugh re-joined the SLI Militia and was appointed Pipe Major serving in this position until 1980. Hugh received many medals and honors including the Military Medal of Merit (MMM) by Governor-General Jules Leger and was the first person in the SLI to receive the Canadian Decoration (CD). Hugh also had the honor of playing the Lament for the Right Honorable John G. Diefenbaker's funeral. In 1946 Hugh joined the Saskatoon Police Department and in just four years was promoted to Detective. Hugh rose quickly through the ranks and was promoted to Deputy Chief of Operations in 1974. During his police career he was awarded the Police Long Service Medal, the Bronze and Silver Bar and the Gold Bar for 35 years service. Hugh contributed greatly to the piping community in Saskatchewan, starting the Saskatoon Girls Pipe Band in 1956 and the Saskatoon Police Pipes and Drums in 1961. He also gave his time generously as an instructor for the 96th Highlanders. His countless hours of instruction and assistance to students and bands have ensure that a great many people in Saskatchewan enjoy playing the same music that Hugh loved so much.