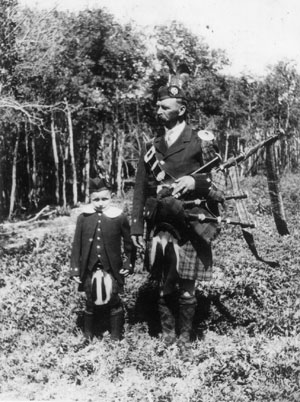 John Hosie was born in Alford, Aberdeenshire Scotland January 7th 1881. He immigrated to Canada in 1903 and settle in Glenboro, Manitoba. In 1904 he came west to Lumsden in search of a homestead which he found in the Silton District and this was his home till 1958. He found himself in the centre of many Scotsmen and he knew this was home. He returned to Scotland and came back home with a bride, Jean Clark in 1910.

His second love, the pipes and he played at all the local events and even formed a 3 man band with his brother Bob Hosie and a neighbour Jimmie Gill. His fame spread throughout the province and he entered many contests but more than that met many “pipers” and bagpipe “lovers”. John was a member of the Silton United Church and the Orangeman’s Lodge. He was also a Board member of the Thorncliffe School District.

He retired to Lumsden in 1958. Death of his wife, poor health and arthritis curbed his activities and he passed on January 5, 1966.

The memories and the friendship of his piper friends and loyal neighbors eased the pain of last few years but the pipes languished and deteriorated in their sturdy box. His son Lewis Hosie and his family were determined that this heritage must survive. Finally Iain MacDonald came to our rescue. He not only restored them but searched the history of them plus a recording of John’s later concerts and details of his many achievements. 1908 was etched on the pipes and Iain says it was likely one of the last set of pipes this company made before moving on to Australia. They are beautiful but very fragile, but Iain played for us and it brought the most beautiful memories back. Now we live in the hopes that a grandson or granddaughter will carry the “torch”.