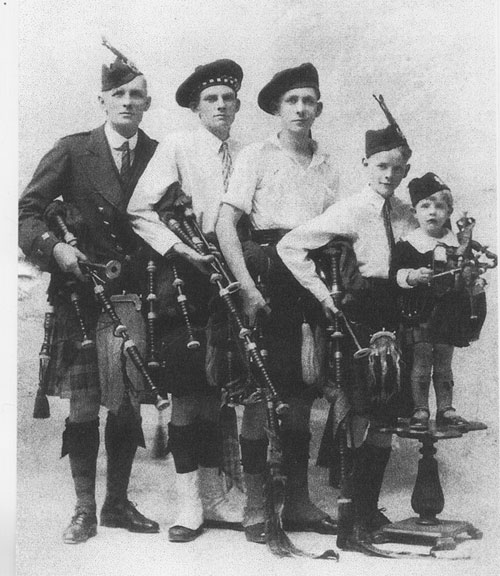 The Beaton family lived and played in the Moosomin area, at Scottish settlements called St. Andrew's and Benbecula. This photo was kindly provided by piper Jamie Simpson, a descendant of the Beatons, who grew up in the Dauphin [MB] Pipe Band.

Pictured are: Norman Beaton, along with Gordon, Ian, Alex and Malcolm.

The following quote is from "A Short History of the Pioneer Scotch Settlers of St. Andrews, Saskatchewan" by James N. MacKinnon, and describes Norman's parents and family, and their settlement in St. Andrews.

The following notes on Norman Beaton are taken from the pipe music book Along the Road.

Norman Beaton came to Saskatchewan around 1885 from Griminish, Benbecula at about the age of three. His father was from the Scottish mainland, and had married Christina McRury, a sister of the well-known Gaelic scholar the Rev. John McRury of Skye. Norman married a local Wapella girl in Saskatchewan, and spent most of his adult life in Moosomin, Red Jacket, and later Brandon, Manitoba. As well as being a piper and composer, Norman was well-known for the “Beaton pipe bag” and was thought to be the inventor of the “swan neck” pipe bag. Norman’s tune Mrs. Mary Beaton was written for his wife. 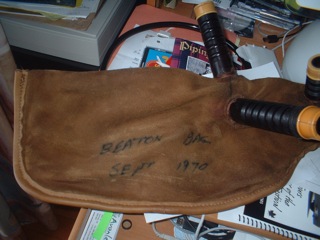 The making of "Beaton" pipe bags was taken over by P-M Bill MacLeod of Winnipeg, later Pine Falls, Manitoba. Bill or "Willie" MacLeod was Norman's son-in-law, and served as pipe-major of the Queen's Own Cameron Highlanders of Canada [Winnipeg] during World War II. Many prairie pipers played these durable, cowhide bags made by Norman and Willie, and Willie also made seasoning to go with them--a traditional mixture of honey and glycerine. The bag pictured here was made in 1970 [that's Willie's writing on the bag] and was replaced in 2007.