This brief tribute appeared on pipes|drums at the time of his death. 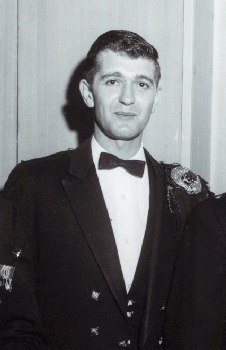 The Saskatchewan pipe band community lost one of its best this week as James “Jimmy” Walker died at the age of 73. Jimmy Walker was an imposing figure in Saskatoon for many years, and he was responsible for teaching many fine drummers.

Born in 1935 in Fife, Scotland, Jimmy grew up drumming in the Dysart and Dundonald Pipe Band, and won many solo drumming prizes as a young man there.  He was one of a number of leading Scottish players who were recruited to play in the Powell River Pipe Band with his life-long buddy Geordie Pryde, who was the L-D at Powell River. Jimmy was one of the key players in that very successful corps, and continued to win solo prizes on this side of the Atlantic.

Jimmy left Powell River and came to Saskatoon, Saskatchewan to work with the Saskatoon Fire Department, and there fell in with P-M Hugh Fraser and the Saskatoon Police Pipe Band and the North Saskatchewan Regiment Pipes & Drums. He was L-D for those bands for many years, and also an instructor to the Saskatoon Boys Pipe Band, the [Moose Jaw] Sprigs O’ Heather, and at summer schools at Fort San. Jimmy Walker loved pipe bands and drumming, and he inspired many young players over the years with his own ability, and also with his teaching.

His best-known students include his son, Jim Walker Jr., who played with the Saskatoon Boys Pipe Band, the Saskatoon Police, and was also the L-D of the Edmonton Scottish Pipe Band with P-M Neil Dickie. In the Late 1980s, Jim Jr. moved to Scotland, and took up playing with Dysart and Dundonald Pipe Band, where he was L-D for some time. He was also the drummer for Celtic band “Ceol Beag” and makes his living teaching and performing various kinds of drumming.

Another student of Jimmy’s was John Fisher, currently the L-D for the new Spirit of Scotland Pipe Band, and a world-renown drummer in both mainstream and pipe band circles. John’s many drumming accomplishments are well known, from being L-D of City of Victoria and the Frasers, to being a member of Alex Duthart’s drum corps in some of its best years.

Jimmy’s long-time students in Saskatoon carry on the tradition of teaching and performing with many Saskatoon pipe bands, and his legacy will continue there. On behalf of all Saskatchewan pipe band enthusiasts, our condolences to Jimmy’s family and friends.