History of the Regina Pipe Band

The Regina Pipe Band was organized in the fall of 1926 when a group of local pipers and those interested met in the Canadian Legion Rooms on Albert Street. However it wasn’t until the spring of 1927 that any semblance of a band could be got together. The first picture of the band was taken at Fort Qu’Appelle on July 1st, 1927. This was the first out of town engagement.

The Following are in the picture:

In the fall of 1927, Capt. Mitchell was appointed Pipe Major. Right from the beginning the band contributed much to the social life of Regina and district. And was much in demand for parades and social functions. Practice was done in the basement of Victoria School, which was not very satisfactory and not always available. In the fall of 1928 Col Parker, a member of the band committee and also a Colonel of the 12th District Signal Corps (militia), had a brain wave, and took the matterup with Military district! Through his efforts the band became known as the 12th District Signals Pipe Band. 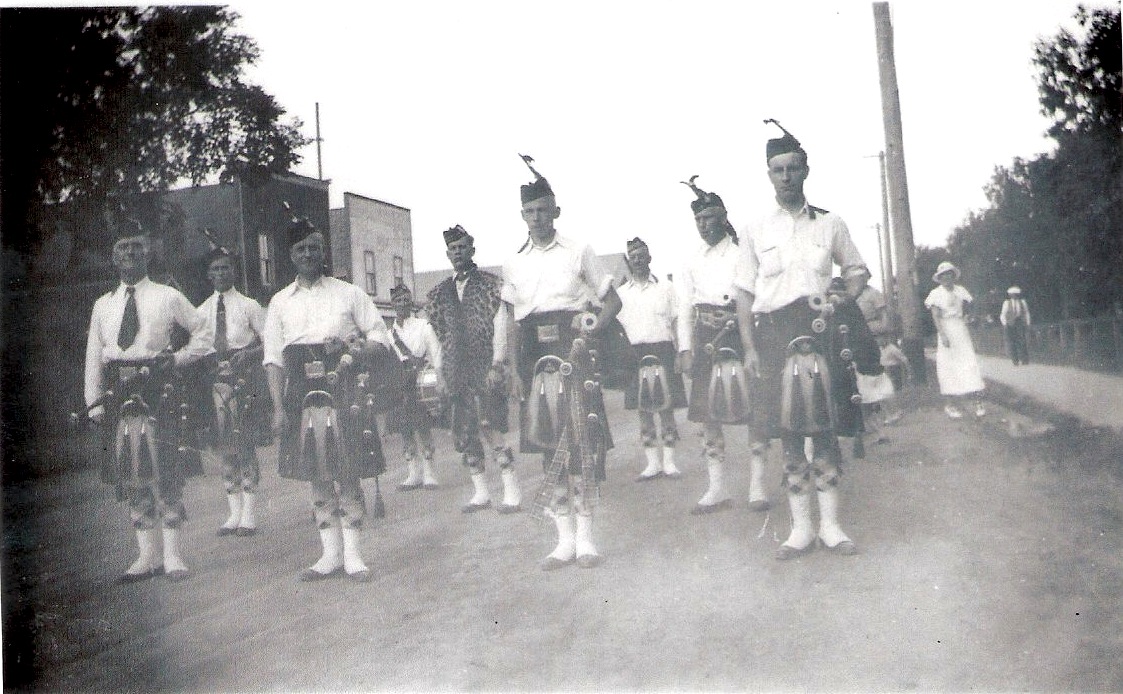 The band by this time had acquired their own kilts, sporrans, spats and hosetops and adapted white shirts with waist belts as their uniform. On becoming The 12th District Signals Pipe Band they were issued tunics by the unit. They purchased leather cross belts for the pipers from the band funds.

A number of the pipers and a few of the drummers did not sign on with the “Signals.” These included T. Mitchell. Douglas Grant, H. MacMaster, J.Cadger, J. MacGeachin. It was at this time Wm. Macgregor was appointed Pipe Major. At least they now had a regular place to practice-first in the Whitmore building on 8th Avenue and then to the Armouries after the building was completed.

1928-31 were memorable years in the history of the band. Apart from local parades, they travelled to many points to perform. In addition they performed in summer months on  alternate Sunday evenings with the Regina Rifle Regiment Band in Wascana Park. During those years the Highland Games were in full swing in Regina. They were sponsored by Camp Balmoral, Sons of Scotland Benevolent Association and the band members did very well in the competition. In 1929, Neil Sutherland won the grand aggregate with pipers from Winnipeg to B.C. competing. In 1930, P/M Wm Macgregor placed 1st in marches and third in strathspey & reel losing out by a few points to Wm Cruickshank of Winnipeg, who had placed 1st in the piobroch, 3rd in the marches and 2nd in the strathspey and reel. Another of our pipers, A. Stewart, placed 3rd in the piobroch, the only Sask. Piper to get a prize in that event. Other prizewinners in the band were T. Gear and J. MacDonald.. Wm. MacGregor had a big day. In addition to his piping, he just missed capturing the grand aggregate in highland dancing when his shoe becoming undone while he was dancing the hornpipe. 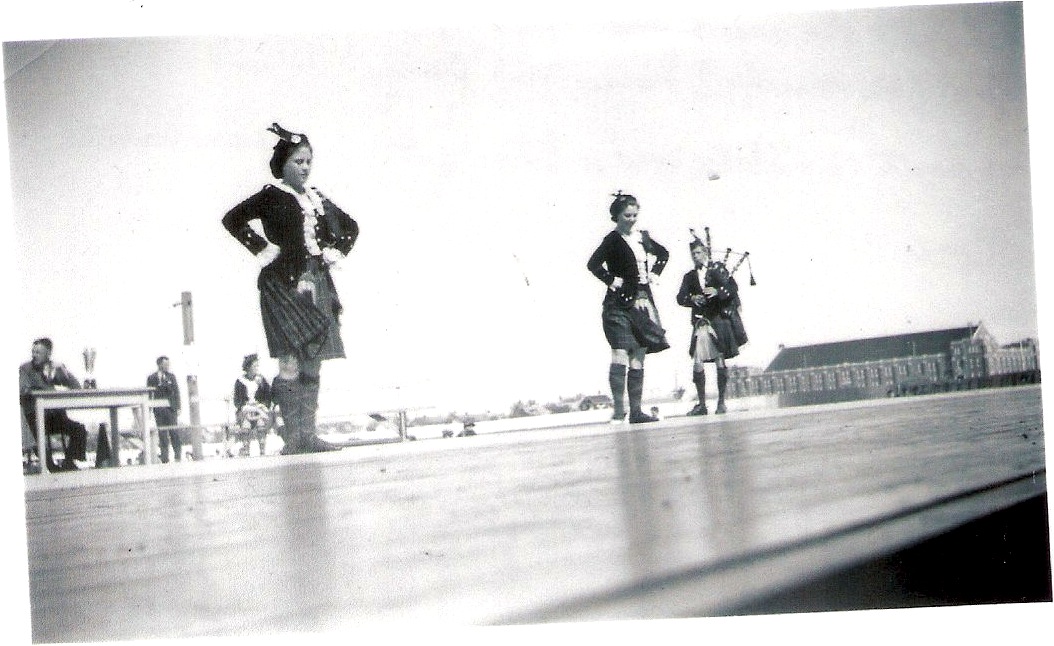 1929-1930 were the big years of the games. 1928 was for the most part Saskatchewan talent only. Jock Chalmers of Weyburn took the grand aggregate in piping and Jean Gaul of Regina the dancing. Other prizewinners were: W. Douglas; D. Kennedy, T. Pattison; A. Stewart. 1931 was a disastrous year for the games. The depression was having its affect on both rich and poor alike with the result only about 200 people attended the games and to make matters worse dust storm raged all day to add to the discomfort of both spectators and competitors alike. The prizewinners that day were: A. Stewart, T. Pattison, J. MacKay, H. Bond. Other Sask. winners were D. Kennedy, J. Chalmers, and J. Hosie. The Sons of Scotland had a deficit of approximately $700 for the day. That was the last of the Highland Games for Regina. They were never started up again until much later. One can readily understand the deficit when you consider $500 was paid out to pipers and dancers alone.

The depression also struck a severe blow to the band. Through lack of work, many of the members left to seek employment elsewhere.  Neil Sutherland, T. Grear, D. Elder, D MacKay, and J. MacDonald all left the city. They were followed one year later by A. Drysdale. The Band however was fortunate to get one replacement, who proved to be a great asset in the person of Andy MacKintosh. Despite their losses in manpower, they continued to carry on and through the good guidance of Pipe Major MacGregor, and by 1934 it was really a first class band. That was the year the World Grain Show was held in Regina. It was also the first time the band played at the Wolf Point Montana Stampede. 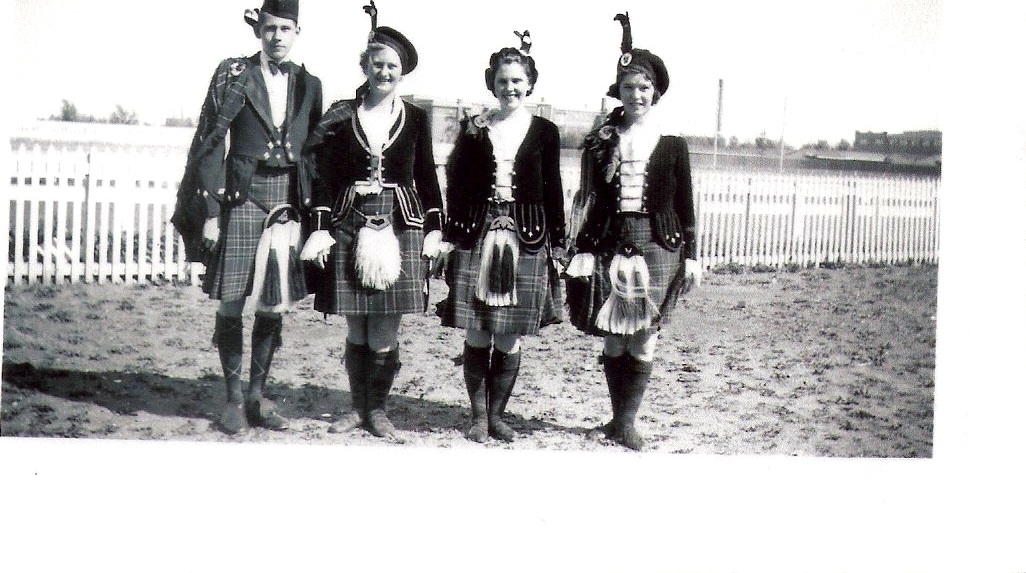 They had played at Wolf Point in 1933 at the opening of the new bridge across the Big Muddy and were invited to play at the Big Stampede the following year. Another new piper had arrived in the city from Scotland. Dave Robertson also proved himself an asset. The band at that time was: P/M MacGregor, P/Sgt. J. Reid, T. Pattison, J. Robertson,  A. Stewart, A. MacKintosh, D. Robertson, Wm. Henderson , J. MacKay and J. Chalmers of  Weyburn helped out on occasion. Another was Ross Wilson, a pupil of Wm Macgregor.   The Drum section was: J. Price, J. Nelson, R. Mclure, J. McClure, H. Livingstone, J. Simpson and Bert Grant Drum Major. As the depression grew worse, however, more of the band members found it necessary to pull up roots. Juried resigned and Tom Pattison became Pipe/Sgt. Hugh Bond, one of the original members, left for eastern Canada, Bill Henderson met with an accident at his work and was obliged to give up piping. One year later, Tom Pattison was transferred by his company to Winnipeg. Jim Simpson the bass drummer resigned through ill health. Harry Livingstone also decided he had had enough.

By the year 1938 the membership of the band was very low. There was, however,  a silver lining, many of the pipers had been bringing along pupils and with a few graduates from the Regina Boys Pipe Band they were able to turn out a fair-sized band.. The first of the boys to come over was Ian MacLeod, a bass drummer. Pipers L Hood, W. Mackay, Ed Black, Murray Wilkie, Vern Murray and also H. McIntyre, drummer and Harry Todd,  drummer.

The band suffered a great loss that year in the passing of Bert Grant, who always worked hard for the band. He had charge of the equipment and was to be found in the drum room, every practice night, seeing that everything was in order for the next parade. John Nelson also worked hard in this connection.

On the 5th of September, 1939 world war broke out and the band went down to its lowest ebb. Practically all the younger members of the band joined the active force and the band was left with only three pipers and one drummer: P/M Wm MacGregor, J. Robertson,  and J. Mackay pipers and J. Nelson drummer. That was the band that played away the first draft of men to leave Regina that year,  forming up at the armouries, and marching to the Union Depot. In the meantime, the Boys Band was also having troubles. and was unable to find an instructor. The executive called a meeting and disbanded the band. The Signals Band was fortunate in this regard and acquired four of their pipers and drummers. Jack Robertson left to live in Vancouver about the same time Hugh Roberts had come to Regina and joined the band. During the war years, despite their small numbers the band continued to play a prominent part in the military and social life of Regina. 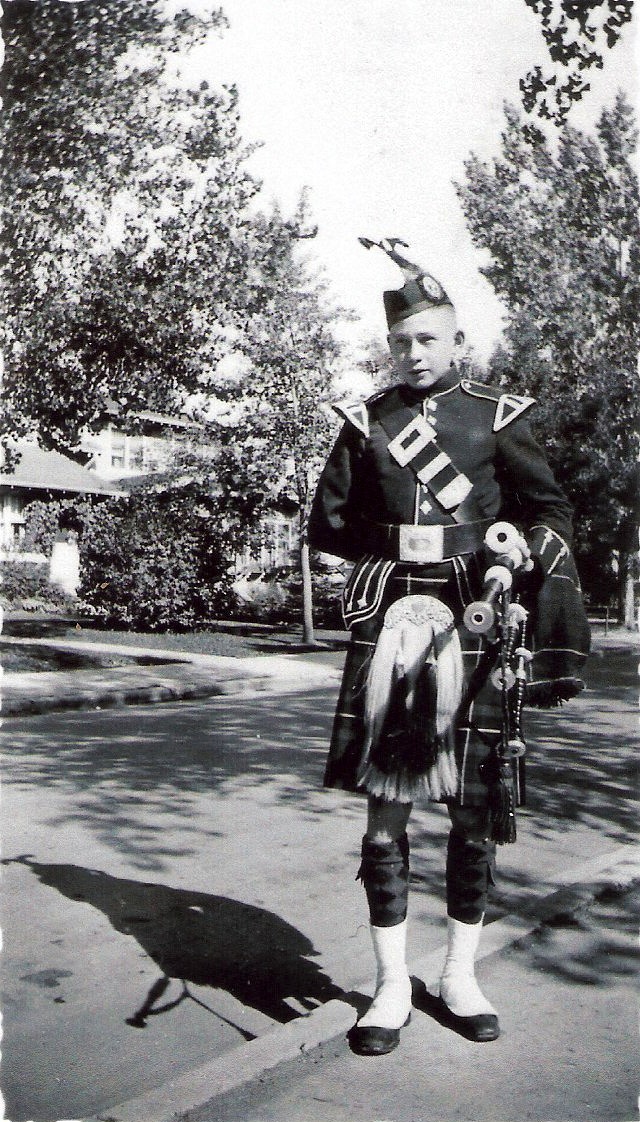 1945 saw the end of hostilities and many of the boys came back to rejoin the band. Unfortunately some did not return. These had made the supreme sacrifice: Ross Wilson, Dave MacKay and Willie Wilkie. Willie-although never signed up with the band-helped them out on occasion, having been the pipe major of the Boys Band. Jim Price was badly wounded in the leg, which left him a cripple for life. The ones returning to rejoin the band were: A. MacKintosh, Wm. Mackay, and Murray Wilkie. By the end of the 1940s and early 1950s, the band had again risen from the ashes to the status of a 1st class band. In addition to the pipers above mentioned, three splendid pipers had come out from Scotland and joined the band. Andy McAnsh, Mat MacLennan and Angus Spence.

The younger members of the band, who had graduated from the Boys Band, had gained in experience. They were no longer boys, but clean-cut young men, and although they may have lacked some of the polish of some of their predecessors, they more than off-set that with their enthusiasm and determination to make good. They proved it at Saskatoon on May 24th 1954 when they won the pipe band contest by eight points over their closest rivals. The credit again must go to Pipe Major MacGregor for his untiring efforts in bringing the band up to the high standard it showed that day with its rendition of The Duke of Roxborough’s Farewell to the Blackmount Forest, Maggie Cameron and Loch Carron. The Band that day was: P/M Wm MacGregor, P/Sgt J. MacKay, J. Duncan, A. Spence, Wm. Mackay, A McAnsh, G. Crawford, R. Sneddon. Some of the drummers were unable to make the trip to Saskatoon and Matt MacLennan, one of the pipers took the lead drum. Other drummers were: Bud Smail, Neil Mackay, A. Pritchard.

The gathering at Saskatoon was the last appearance of Jock MacKay, who had retired and was moving to Victoria, B.C. to make his home. With his departure Wm Macgregor became the only member left of the old original band. This proud record of dedication stood for many years. Willie MacGregor retired as Pipe Major in 1958 and was accorded one of the most memorable evenings by pipers drummers and acquaintances from all parts of Canada, taking the form of one great night of piping and drumming. For a time he took a spot that he wanted in the band-back rank left side-where he had the opportunity of hearing his drone sound and felt very comfortable. Jim Duncan was appointed Pipe Major for a short term, and he was succeeded by Pipe-Major George Crawford. MacGregor moved to Victoria B.C. in 1959, while Jimmy Duncan retired to Mission, B.C. When the  Royal Canadian Corps of Signals was reduced to dormant strength, the band was sought  after by 10th Field Regiment Royal Canadian Artillery and the Royal Regina Rifle Regiment. The Military District Command ordered the band moved to the Artillery Regiment. 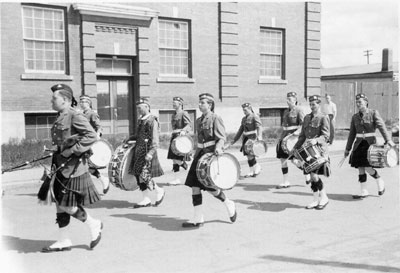 1957 This was the local militia pipe band in Regina after WW2. 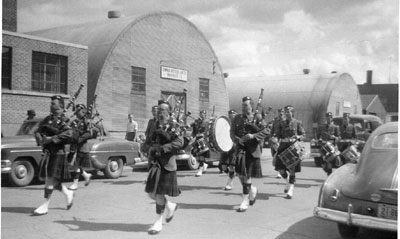 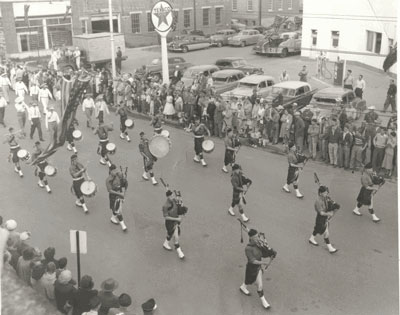 1950s
Bill Pritchard [whose dad was the lead drummer, and later a piper] writes:

"I had my dad send me this picture of the 10th Field from the early 50s.

Some of the names are missing, but maybe someone knows who they are".