The band is pictured on the right (viewer left) flank of the 16/22 Battalion, taken sometime during the war. The photo was in an antique store and he wanted $200 for the whole thing, so we took a couple of sneaky shots of the band part.

Jock Chalmers of Weyburn was often on the judging panels in the late 1960s and 70s, and he was an ex-Scot who served with the 16/22 Horse, and was posted overseas. In a 1974 letter to Jim McWilliams, he writes:

"To begin with, the Regiment was mobilized around 1940 from the Lloydminster area. Their commanding officer was Lt. Col. Van Allen, although not a piper himself, he was an ardent lover of the music of the Great Highland Bagpipes and of course it was him who was the great influence behind the forming of the Pipe Band. As I have mentioned before they weren't approved by the Can. armed services and were strictly sponsored by the regiment, and I would imagine some outside help. We were in the army records as buck privates, not pipers.

There were 15 pipers and 7 drummers. Nine of the pipers were originally from the Hebrides, the Island of South Uist, one from the Island of Lewis, three from the mainland of Scotland - including myself - and two Canadians with a Scottish background, who were pupils of mine and members of the Weyburn St. Andrew's Society Pipe Band. Most of them were good pipers and took pride in their pipes going like bells or humming like bees, as the saying goes." 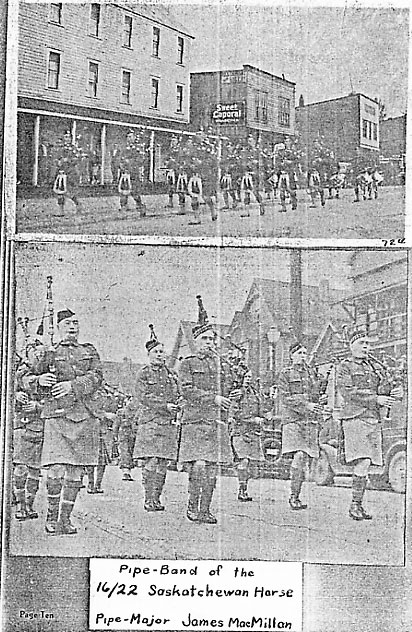 Jim was collecting information on the bands and passed all this information on to the SPBA. The letters are really worth reading for John's (Jock) history of the 16/22, and also for his obsercvations of Scottish and Canadian piping. Another letter is from Roderick McMillan, who was also an original member of the 16/22. They both give interesting details of the formation of the regiment, the origin of the members, and Joch Chalmers has many interesting details about the uniforms and style of playing.

From the Canadian Forces web site: